It was a reunion of sorts for Tulare County’s own “Flying Burrito Brothers” amateur volleyball team at the 25th annual California Family Business Award dinner last night in Fresno. 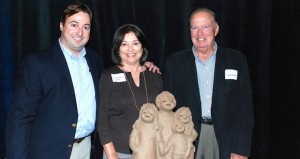 “We are always here for each other so we can be there for our customers,” Dax said of the Brott family.

He also thanked the company’s 34 employees and those from the past, dating back to the mechanical contractor’s founding by Ernest Emmet “Double E” Brott in Burlington, Kansas in 1910.

Installation of a powdered milk system brought the Brotts to California Dairies in Tipton in 1927. Sensing opportunity, son Gail Brott helped establish a plumbing and sheet metal shop in Tulare in 1935. The company expanded as Garth came to the helm in the 1970s.

Today, BMI Mechanical provides heating, ventilation and air conditioning solutions for commercial clients throughout the state, from telecommunications companies, banks and hospitals to dairies, food processors and even the alternative energy industry

BMI Mechanical was among five finalists for the Central Valley’s only family business award, bestowed annually by the Institute for Family Business at Fresno State’s Craig School.

• The Garabedian Group in Fresno, a second-generation financial consulting, accounting and advisory firm with roots dating back to 1985 with founder Dale Garabedian

• Clovis-based Jan Thomas Swim School, a second-generation school founded by Jan Thomas, who has taught nearly 60,000 kids how to swim since her start in 1958.

• Pickett & Sons Construction, a third-generation Fresno contractor founded in 1971, behind such projects as the new three-story headquarters of Fresno law firm McCormick Barstow.

A new honor for the program, called the Rising Star Award, was given to Salter’s Distributing in Madera. The award goes to businesses that may not have the longevity of other family businesses, but exemplify their best practices. Founded in 1990 by David Salter, this second-generation family wholesaler provides goods — toys, batteries, tools, sunglasses, etc — to area retailers.

Delivering the keynote address of the night was Fred Ruiz, accompanied to the event with family members and key team members including wife Mitzie, daughter and Ruiz Foods Chair Kim Ruiz-Beck and CEO Rachel Cullen.

Ruiz was instrumental in the founding of the Institute for Family Business 25 years ago. He said family businesses must constantly evolve to survive and thrive, especially in the face of the digital revolution and unsure economy.

“A successful family business is a long-term goal, like a marathon that never ends,” Ruiz said. “It’s not a straight arrow.”

Ruiz Foods, itself a third-generation business, is also celebrating its 50th anniversary this year. Ruiz shared a slide presentation of the company’s history, from humble beginnings to presidential visits and domination of the US frozen Mexican food market.

When Ruiz Foods got its start, a five-person burrito-making line with rudimentary equipment could churn out about 60 burritos an hour. Today, one person manning an automated line can make 65 burritos a minute.

The most moving part of Ruiz’s talk was the story of when he and father Louis traveled to Washington in 1983 to receive the US Small Business Person of the Year Award from President Ronald Reagan. As part of the trip, award winners were treated to a wreath-laying ceremony at the Tomb of the Unknown Soldier at Arlington National Cemetery.

Unbeknownst to Fred, his father — a World War II Army veteran — was invited to participate in the ceremony alongside other military personnel. Fred choked up as he recalled the sight, his dad marching ramrod straight, executing sharp pivots as he carried the wreath.

“I had never seen my dad like that. It was like he was in Okinawa, back in World War II,” Fred said. “He walked like a soldier.”

Three of the Top 10 office complaints:
1. Too cold in office
2. Too hot in office
6. Poor indoor air quality

Thank You for the quality of service that you have given this division over the past 20 years. Any time we have called with an issue regarding our air conditioning units, you have responded very quickly and professionally. Under our maintenance agreement you have kept all of our units serviced and in excellent running condition. Your staff is professional and always available to meet our needs in a timely manner.